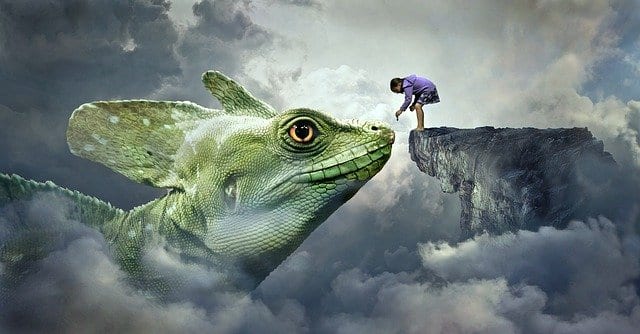 Image by Stefan Keller from Pixabay

We all have our own personal dragon whose breath on the back of our necks keeps us running through all of our usual patterns and reactionary habits.

You know the one. It’s the beast that threatens to devour you in its oversize jaws that belch out stream of flames when you don’t follow its bidding.

It goes by many names, names that are unique to each one of us. Names like Fear of Failure, Fear of Abandonment, Fear of Rejection, Fear of Being Unloved. Or there’s my own personal dragon who goes by the name of Fear of Not Being Enough.

Sound familiar? Wouldn’t it be wonderful to tame that dragon so it no longer drives you like prey?

The first step to taming your dragon is being able to identify your own personal dragon.

Your dragon is the fear that keeps you on whatever treadmill of performing, earning approval, seeking admiration, striving for success, or hiding from reality that is your personal hell on earth.

My own personal hell is that of perfectionism. I push myself to meet impossibly high standards, beat myself up viciously when I miss the mark, and react badly to other people’s criticism because my own internal criticism is already deafening enough without theirs piled on.

But my perfectionism has always been my attempt to outrun my dragon, so attempts to deal with the perfectionism directly have never done any good because the dragon was too powerful to fight.

I could not even begin to deal with the compulsive need to be perfect until I identified the dragon who was driving the compulsion.

It was only when I identified Fear of Not Being Enough as the dragon who was forever nipping at my heels, pushing me to run ever faster, that I could even begin to get to the root of the problem.

The futility of fighting the dragon

Naturally, my first instinct was to turn and fight the dragon directly once I knew who it was.

But dragons are scary creatures for a reason. They are big and powerful, they come well protected with thick hides covered with scales and sharp spikes, and they spew flames on their breath.

Dragons don’t go down easily, and neither did mine. In fact, the more I tried to fight directly against it to prove that I was good enough, the more I failed.

Nothing I can ever do will ever make me good enough for everyone. No matter how hard I try, I will always have flaws.

Each battle with this dragon left me bloodied and bruised and discouraged … and trying that much harder to be perfect to keep from being devoured.

Fortunately, there is another approach that works better.

Your dragon has a secret. They all do.

No matter what it may call itself as it swoops down on your heels, its secret identity is Pain.

That’s what all of us are actually fleeing. We are running from our fear of having to face the one Pain that seems unbearable to us. The one Pain that we are convinced will devour us.

Either way, what gives our dragon its power is the Pain we think we cannot endure, the Pain that we cannot allow ourselves to fully face.

As I’m sure you’ve guessed by now, the only way to effectively face the dragon is to face that Pain we think we cannot face.

This is not a task for the fainthearted. It means standing in the direct stream of every bit of flame the dragon can spew in your face, letting that flame burn away all that which is unhelpful in the painful agony of loss only to discover that you can indeed face that which you thought you could not and that what the flames have left behind are purified gold.

I was not enough to anyone anywhere I turned. And not only that, it quickly became apparent that I would never be enough. I never had been enough, and I never would be no matter what I did.

There was always something about me that any given person wanted to fix or change.

Because life didn’t give me any choice, I faced that not-enoughness head on. I’ve never felt so completely broken. I thought the pain of discovering again and again that I was not enough would kill me, but it didn’t.

I faced my dragon, and I survived.

Making the dragon your ally

In facing down my dragon and the pain of never being enough, I discovered that the only person that it ever really mattered whether I was good enough for was me.

I had been so busy trying to be good enough for everyone else that I had lost sight of whether I was good enough in my own eyes.

It was only when I was forced to give up any hope of being good enough for anyone else, that I had to come to terms with whether I was good enough in my own opinion, no matter what anyone else thought.

Much to my surprise, I discovered that I am. I am enough, and once I knew that for myself, no one else’s opinion could ever take it away again.

Sure, it stings (sometimes badly) when someone else lets me know that I am not good enough for them in some way or another, but it doesn’t shake my worth any more. Yes, I still have strongly perfectionistic tendencies, but I am learning to beat myself up less and less.

Now when I feel the approach of that familiar dragon on my heels threatening me with not being enough, it reminds me to get back in touch with the core of my enoughness that is impervious to others’ opinion of me. It brings me back to my center.

In this way, my dragon has become my ally who reminds me of what matters. It helps me notice when I’ve lost my center, so I can do what’s needed to correct that.

Your dragon, once you’ve faced it, can become your ally in the same way. The key is in facing it and its secret identity fully and completely (with all the support you may need to do that) instead of fighting.

Do you know your dragon’s name? Are you willing to face it?

If you’d like to receive more inspiration and encouragement for living your own kintsugi life, subscribe to get weekly notifications of new blog posts in your inbox.

This blog offers monthly articles on the general theme of kintsugi living.

Unless otherwise noted, all posts are written by Kenetha J. Stanton, the kintsugi-inspired artist and writer behind A Kintsugi Life.

Want to contribute your story of kintsugi living? Review the guest posting guidelines and send in your contribution. We’d love to share your story!

Search full site
Recent blog posts
Categories
We use cookies on our website to give you the most relevant experience by remembering your preferences and repeat visits. By clicking “Accept”, you consent to the use of ALL the cookies, or use the Cookie settings link to accept only some of the cookies by type.
We never sell your personal information for any reason, but you may still opt out by checking the box below.

This website uses cookies to improve your experience while you navigate through the website. Out of these cookies, the cookies that are categorized as necessary are stored on your browser as they are essential for the working of basic functionalities of the website. We also use third-party cookies that help us analyze and understand how you use this website. These cookies will be stored in your browser only with your consent. You also have the option to opt-out of these cookies. But opting out of some of these cookies may have an effect on your browsing experience.
Necessary Always Enabled
Necessary cookies are absolutely essential for the website to function properly. These cookies ensure basic functionalities and security features of the website, anonymously.
Functional
Functional cookies help to perform certain functionalities like sharing the content of the website on social media platforms, collect feedbacks, and other third-party features.
Performance
Performance cookies are used to understand and analyze the key performance indexes of the website which helps in delivering a better user experience for the visitors.
Analytics
Analytical cookies are used to understand how visitors interact with the website. These cookies help provide information on metrics the number of visitors, bounce rate, traffic source, etc.
Advertisement
Advertisement cookies are used to provide visitors with relevant ads and marketing campaigns. These cookies track visitors across websites and collect information to provide customized ads.
Others
Other uncategorized cookies are those that are being analyzed and have not been classified into a category as yet.
Save & Accept
Powered by